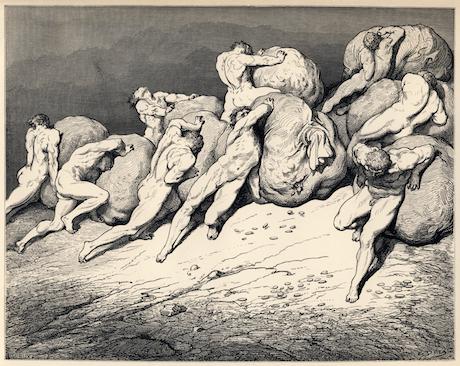 Neoliberalism encourages us to treat every aspect of our lives as if it were on sale in a marketplace: is it an anti-spiritual project?

“It’s the economy stupid!” Politicians exhort us to focus our minds on our material priorities, when really they are stealing our souls. Neoliberalism is a political project that is designed to separate us from what makes us fully human. Or, as Lauryn Hill sings in Consumerism:

The way we talk about a problem shapes the solutions we come up with. Most discussions of neoliberalism talk about it either in material terms, or as a mind-set which is about imposing a rational economic calculation on more and more areas of our lives.

Both of these are important elements of neoliberal ideology – it is of course tied up with extracting the world’s physical resources at an ever-increasing rate, and also about encouraging us to treat every aspect of our lives, from education to romantic relationships, as if it were on sale in a marketplace.

But this is not whole story, and may take us to some misleading places if that is our starting point for resistance.

Neoliberal thinkers have always understood that they were engaged in a project to transform human nature. As Jeremy Gilbert says in his book Common Ground, early liberal thinkers in the 19th century thought that people naturally were rational economic agents, and if you liberalised society enough people would start to act like competitive individuals automatically.

The neoliberals developing their thinking after the Second World War, on the other hand, weren’t convinced “that the condition of appetitive, entrepreneurial individualism is in fact a natural one for human beings”. If they wanted people to act as if they were, these behaviours would have to be created. This is what Thatcher was alluding to when she said “economics are the method: the object is to change the heart and soul”.

What Thatcher wanted to change about the nation’s “heart and soul” was the tendency towards collectivism, which she thought stood in the way of wealth creation. We had to come to believe, as she did, that the best kind of society was one in which we were always competing with one another as individuals, rather than one where collective liberation was possible – or at least to believe that there was no alternative, even if we didn’t like it.

In one sense, neoliberalism can be seen as an anti-spiritual project. It encourages, and often forces, us to shut down our wider consciousness, which knows we only exist in relation to others, and to doubt our most primary experiences of connection and meaning.

But it is important to recognise that the means of achieving this anti-spiritual project, in which we come to over-identify with an individualistic, rationalist, calculating inner monologue, are not themselves primarily rational and explicit.

This is actually obvious if we look at the content of advertising. If we were just looking for ‘the best deal’ when buying a pair of shoes, why would we care what the model looked like who was wearing them? If we were actually atomised individuals, why would images of romantic love or joyful parents and children be so effective at selling everything from insurance to deodorant?

The signs are everywhere that neoliberalism understands we are embodied, emotional, relational beings who want to experience love and connection. It’s just that we are being told to find them through buying consumer goods, rather than through genuine relationships. We know that when we confront this directly, it makes no sense. Money, as the Beatles sang, really can’t buy you love. But this communication isn’t happening on that direct, explicit level – it is largely unconscious, speaking to deep-seated hopes and fears. In this sense it is also spiritual, addressing our wider consciousness in order to keep us disatisfied and disconnected. Neoliberalism uses spiritual means to achieve anti-spiritual ends.

Of course, consumer goods are ineffective at meeting our needs as a whole human beings, and the personal impacts of not having these needs fulfilled on well-being and mental health are well-documented.

These particularly acute when we look across lines of class, race, sexuality, gender and other markers of identity, as the dog-eat-dog logic of neoliberalism is brutal when applied to people from marginalised communities. When your race, class, sexuality, physical abilities or other aspects of your identity are used as weapons to oppress and marginalise you, you are systematically disadvantaged in the “race to the top”, while simultaneously being told that these failings are entirely individual. This is often internalised as a sense of shame, and projected on to others as fear, leaving many people feeling intense isolation.

So how do we escape from this neoliberal lock in? The answer is deceptively simple – isolation and shame can be fought through experiences of connection with ourselves and others.

At a personal level, we need to develop practices of self-care which enable us to tune out the “noise” of neoliberalism and attend to what is really going on inside of us. The kind of practices which can work are no secret – we have personally been helped by meditation, disconnecting from social media and taking regular walks in unbranded spaces, among other things. There are no shortcuts though; the difference between a powerful counter-neoliberal act and total bullshit is hard to draw, not because these techniques are ineffective but because they are difficult to do well.

And it makes sense that it’s hard. We are in a war of propaganda with hugely unequal resources, constantly told by a huge arsenal of advertising, media messaging and financial control we are not enough and that we must compete with each other to have a sense of self-worth.

Although the propaganda is relentless, what we have on our side is the fact that it simply isn’t true – and we do all know this. When we create the space to connect with that inner truth, we can get in touch with new sources of meaning.

Alongside the personal work, we can also liberate our wider self through connecting with each other – through creating communities. When we experience genuine acceptance from others, it acts as a powerful proof that we don’t have to “beat” one another in order to feel a sense of self-worth.

For many people on the left, the term ‘community’ is viewed with suspicion, being associated with oppression and control. There are valid criticisms here, and the communities we build have to have solidarity and breaking patterns of oppression at their heart.

This is sensitive and self-confronting work, more so for people whose identity helps them get ahead in our neoliberal world: white, middle-class, straight, cisgendered, able-bodied people, particularly men.

It requires us to hold a mirror up to ourselves to see the ways that our behaviour can – often unwittingly – perpetuate patterns of dominance and oppression. Creating safe environments where people with different identities can share their realities, and bearing witness to the struggles of others, can help us find our way back to each other.

These need to be spaces which acknowledge that the ways in which we have been separated from one another have not just been rational, explicit or cognitive but have also been implicit, emotional and embodied – and need to be countered on that level. We haven’t thought our way into this problem, and we won’t be able to just think our way out of it.

A powerful example was in a power and privilege workshop Deborah attended recently, led by Teju Adeleye, where the group of 12 included people of different ages, genders and ethnicities, and also three deaf participants and two BSL translators.

The conversation was particularly rich and challenging because the hearing participants had to embody some of the effort that deaf people face every day in trying to make themselves understood in a world made for hearing people. This seemed to bypass the defensiveness that can arise in power and privilege work, as it brought a previously unconsidered unconscious privilege into our awareness, not just as an abstract idea but as a lived reality.

As with personal practices there are no shortcuts, and the difference between a transformative moment of connection and a meaningless encounter is subtle. But while it is hard to do well, it is actually within all of our power to take these steps towards liberation. Against all of the firepower, money and resources our elites are using to separate us, the first step towards a different future is as simple as turning to the person next to you – particularly someone who is different to you – and asking how they are. The challenge is to really mean it.

What's the AGOA and why is it bad for Africa?

« Previous post
Ivory Towers in a world without elephants?
Next post »
Who is creating the future nobody wants?