Our world is a diverse place, brimming with millions of ideas. But isn’t it strange: when it comes to economics, for some reason we’ve all ended up settling for the same system, a single story.  Capitalism.

Capitalism is everywhere. It dominates nearly every country on the planet. We talk a lot about what capitalism is about – private enterprise, advertising, stocks and bonds, the market. But we rarely talk about the why – the deep logic that makes capitalism tick.

Look under the hood, and it all boils down to one golden rule: to create more capital.

This ruthless and often violent focus is given a sweet logical sounding name: growth. Like a hungry beast, the economy needs to grow at about 3% per year just to stay afloat; otherwise, it collapses into crisis. Debts can’t be repaid, firms go bust, people lose their jobs. We’ve created a system that is structurally dependent on endless expansion.

It doesn’t have to be this way. We can choose to create an economy that doesn’t require endless growth. In fact, it’s already happening. There is a growing body of alternative thinking called post-growth economics. 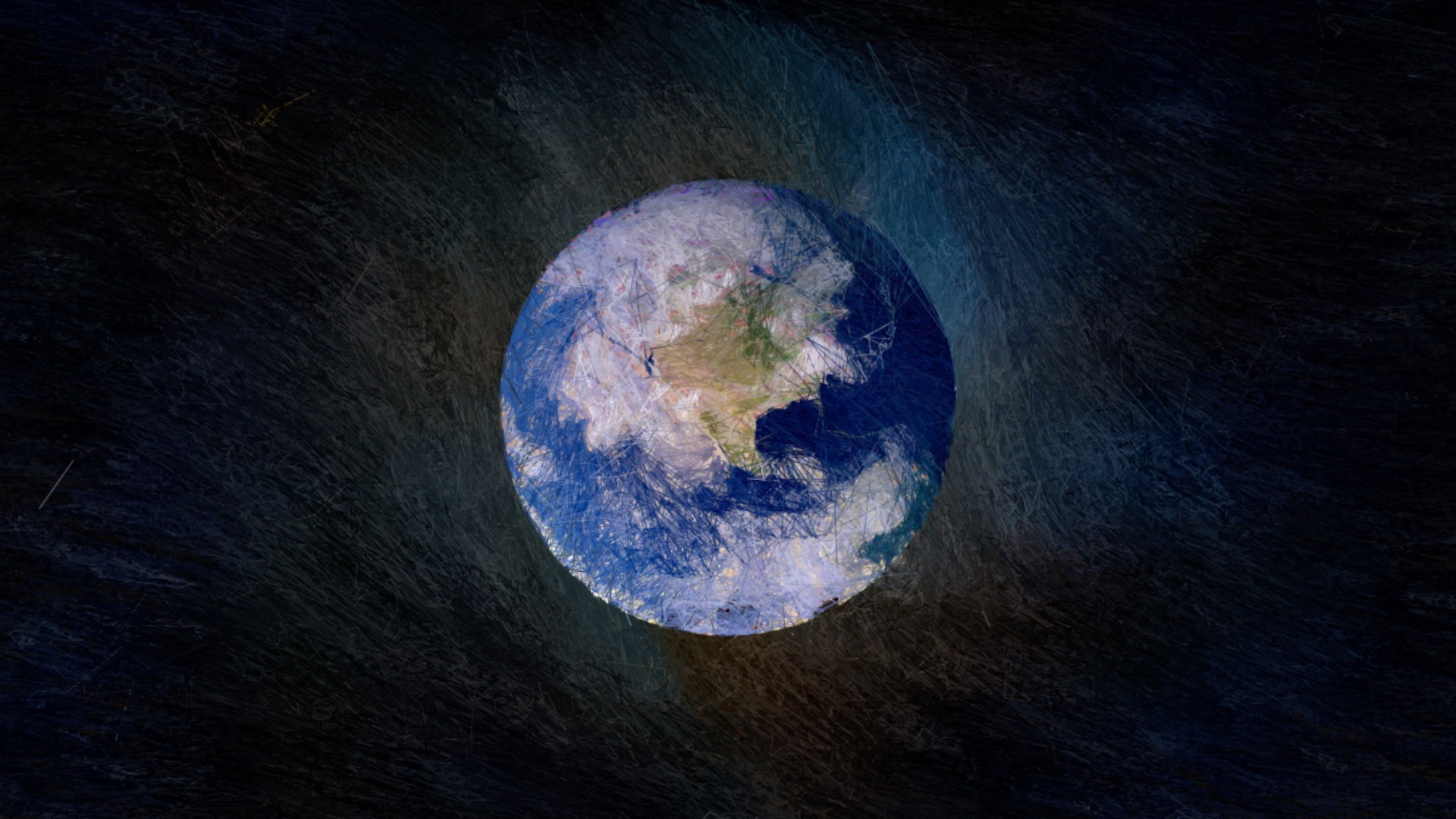 The starting point for post-growth is to challenge the myth that growth is necessary. Economists and politicians tell us that we need growth in order to eradicate poverty. But of all the new income generated by growth, only 5% of it goes to the poorest 60% of humanity. Growth is an extremely inefficient and ecologically insane way of improving people’s lives.

Our world is an abundant place with more than enough for everyone. The issue is that most of our planet’s wealth is held in the hands of a tiny elite. If we can find ways to share what we already have more fairly, we won’t need to plunder the Earth for more. This is the core principle of a post-growth economy: equity is the antidote to growth.

There are many ways to get there. From new types of money that undercut the drivers of growth, to regenerative farming to rebalance our food systems, to new ways of measuring progress and wellbeing. Ideas abound.

An obvious first step would be to replace Gross Domestic Progress (GDP) and embrace saner, more holistic measures of progress like the Genuine Progress Indicator, which accounts for the negative ecological and social impact of economic activity. Countries as diverse as Bhutan, Sweden and New Zealand are already embracing alternative measures.

The time to adopt new alternatives is now. We have a choice to make as a civilization: we either prioritize growth or prioritize Life. We cannot do both. If we are going to survive the Anthropocene, or even this century, it will be because we create post-growth economies, that allow us to flourish in harmony with this beautiful and generous planet we call home.

As scientists have concluded that infinite growth isn’t possible on a finite planet, many economists have reacted by saying we shouldn’t worry – all we need to do is make growth “green”.  “Green growth” means GDP grows while resource use and emissions diminish.

When green growth theory was first articulated by international organizations in 2012, there was no evidence on whether it was actually possible. It was pure speculation. Since then, three major studies have set out to test this question, including by the United Nations Environment Program.

The results are astonishing: all three studies conclude that even under the best possible conditions, with high taxes on carbon and resource extraction plus rapid rates of technological innovation, it is not possible to grow GDP while reducing our impact on the planet. You can read more about the results of the studies here.

Of course we’re going to need all the new technology and all the strong government policies we can get.  But they will not be enough, in and of themselves. The science is clear: we cannot rely on the myth of ‘green growth’. It’s as trustworthy as ‘healthy cigarettes’ or ‘clean coal’.

The old generation of innovators believed that technology would allow us to subdue Nature and bend it to our will. Our generation is waking up to a more hopeful truth: that our survival depends not on domination, but on harmony with all of Life.

FOR MORE INFORMATION ON POST-GROWTH:

Is it time for a post-growth economy? By Jason Hickel

What if economic growth isn’t as positive as you think? By Martin Kirk

FOR MORE INFORMATION ON GREEN GROWTH:

From Green Growth to Post Growth  by Alnoor Ladha

FOR MORE INFORMATION ON POST-GROWTH ECONOMICS: 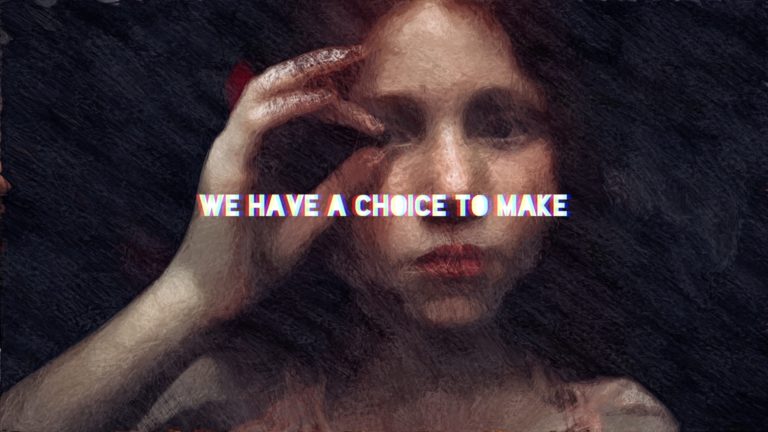 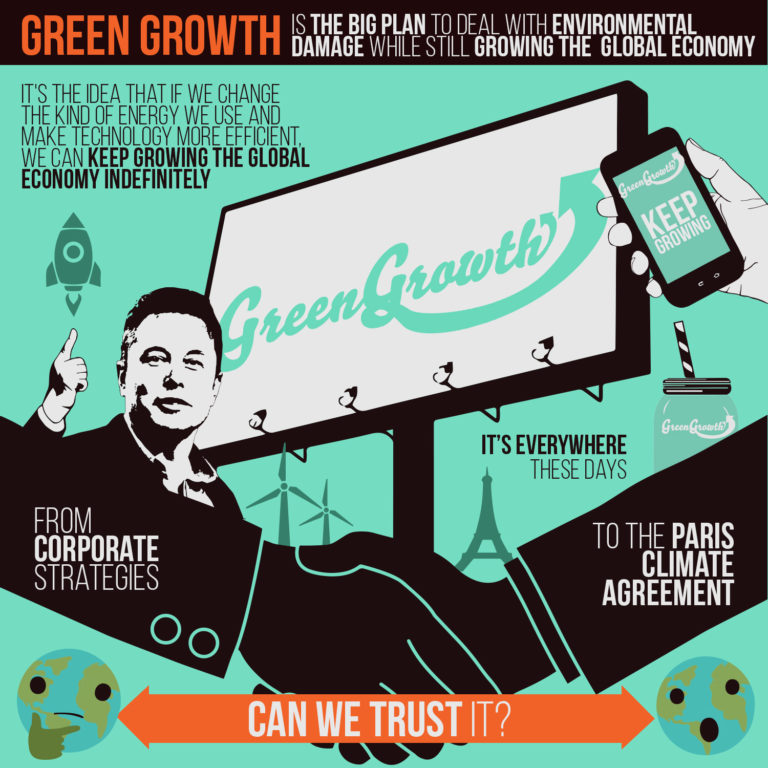 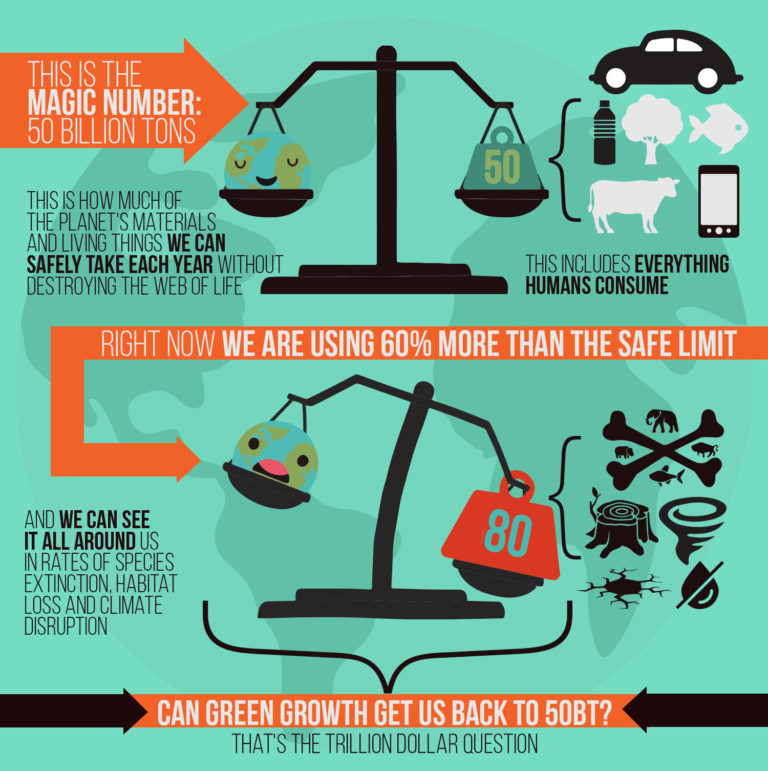 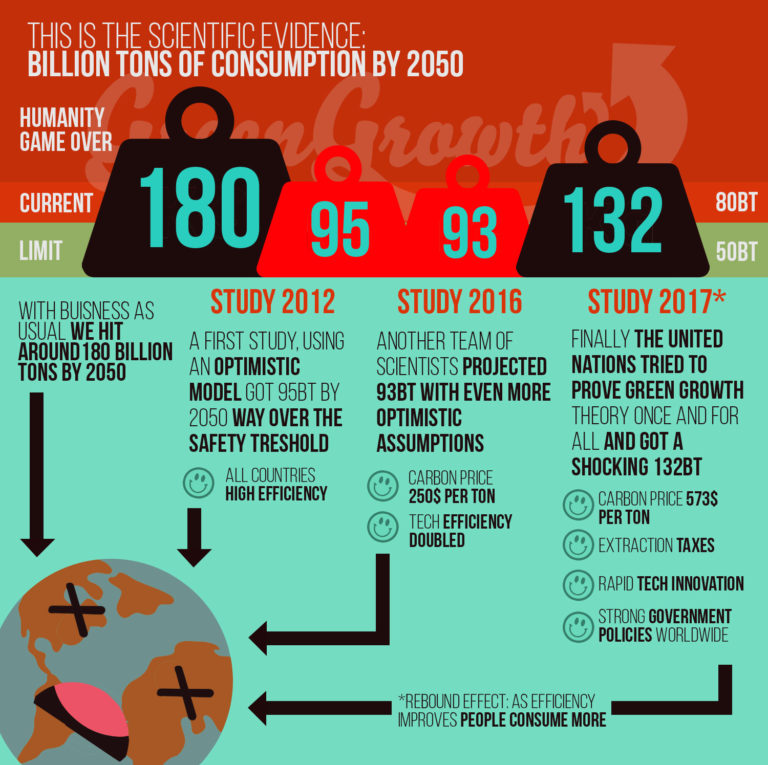 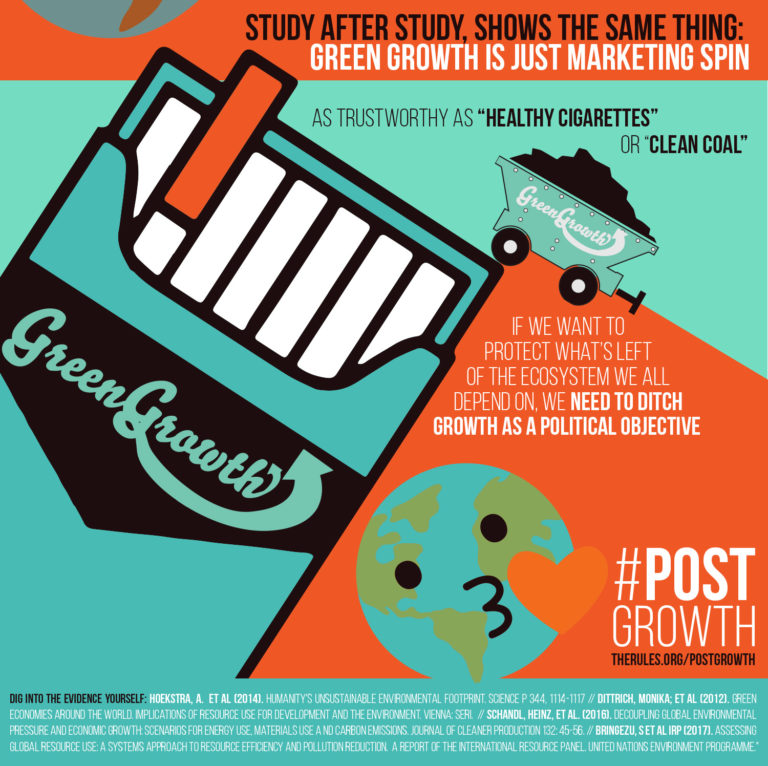