One of the biggest challenges to unlocking post-capitalist imaginations is the pervasive idea that economic growth is an unmitigated good. We set out to hack the logic of economic growth and the trendy notion of “green growth”, and to create a provocative meme to make it impossible to turn away from reality: that at this critical point in human existence, we must make a choice between #GrowthOrLife.

One of the most challenging aspects of giving birth to “post-capitalist” or “post-growth” alternatives is the inherent cognitive bias that growth is unequivocally good. There are many reasons why the meme of growth is so seductive. As a metaphor, growth is often equated with Life itself. Trees grow, children grow, the universe expands, etc. Growth is an upward trajectory, an optimistic ideal closely linked with the idea of “progress”. As every politician is quick to point out, economic growth means more jobs.

The new narrative around “green growth” that was emerging in early 2018 was the latest liberal manifestation of this logic. Green growth rests on the idea that technology will become more efficient and allow us to grow the global economy while reducing our impact on the environment. In other words, we will be able to decouple gross domestic product (GDP) from resource use and carbon emissions.

This is appealing to the reformist mind — it provides an apparent middle ground and removes the need to question the core logic of the global economy.

When we set out to hack the growth narrative, we knew we had to address three prongs. The first was to question the logic of economic growth itself; then to remove the logical counter-argument of green-growth as a solution; finally, to bring in the idea of “many ways of knowing and being” – localism, traditional Indigenous knowledge systems and polycultural approaches as antidotes to globalization and monoculture (of both the mind and the field).

We were also familiar with, and part of the emerging de-growth movement. The issue we had was that the movement was largely academics who tended to downplay the story-telling aspects of creating viable alternatives. Rather than negotiating with a coalition of heterodox economists, policy makers and others, we decided that we would create a practical example of “post-growth” logic in motion that could be adopted by those who were interested.

Our narrative intention was to question and disrupt the logic of growth as inherently good. In order to do this, we decided pit growth against something that is inherently “better” in order to create cognitive dissonance for an idea that is rarely open to reconsideration. From this, the organizing principle of #GrowthOrLife was born.

We launched the #GrowthOrLife campaign in three phases. The first was addressing the green growth narrative that was gaining momentum at the time. We created a short “explainer” video to demystify the topic. We brought in the antidote meme of “post-growth” into the debate. We created a landing page at TheRules.Org/PostGrowth as a home for remixable memes, articles, videos, etc.

We simplified a lot of complex economic thinking into one number: 50 billion tons.

That’s how much of the Earth’s materials and life forms we can safely use each year, without destroying the web of life.

In 2018, we were using about 80 billion tons a year – way over the limit.  We made the conclusion very simple: for growth to be green, we need to somehow get back down to 50 billion tons despite expanding GDP. And then we demonstrated that all the evidence points to the fact that this is not happening and will never happen within the capitalist paradigm.

We waited a few months. We tracked the analytics of the debate. We allowed the counter-arguments to surface. And we waited for the right moment for the second part of our offensive to introduce the #GrowthOrLife campaign. We had a launch video and a series of articles in key publications from Fast Company to Truthout.

As we saw increasing interest and use of #GrowthOrLife, we decided to work with one community that had approached us and was directly being asked to make the choice between growth or life. That was the community of Atenco outside of Mexico City where there were plans to construct the largest mega-project in Latin America at the time – the new Mexico City international airport – that was proposed to pave over one of the last sacred lake beds of the region and further displace tens of thousands of Indigenous peoples and small holder farmers. #GrowthOrLife became memetic source material for #YoPrefieroElLago (“I Prefer the Lake”).

This was an unplanned and important turn of events. It is a testament to the notion of emergence as strategy, assuming there is shared narrative intent. Our plans to broaden the campaign to address “many ways of knowing and being”, bring in localism and traditional Indigenous knowledge systems happened in a more organic way through a long-tail of articles and public debates challenging growth and the Western notion of “progress as an arrow”. This work still continues as individual members of the TR collective continue to support the work of #YoPrefieroElLago and also challenge the New Optimism agenda of Bill Gates, Stephen Pinker and others. 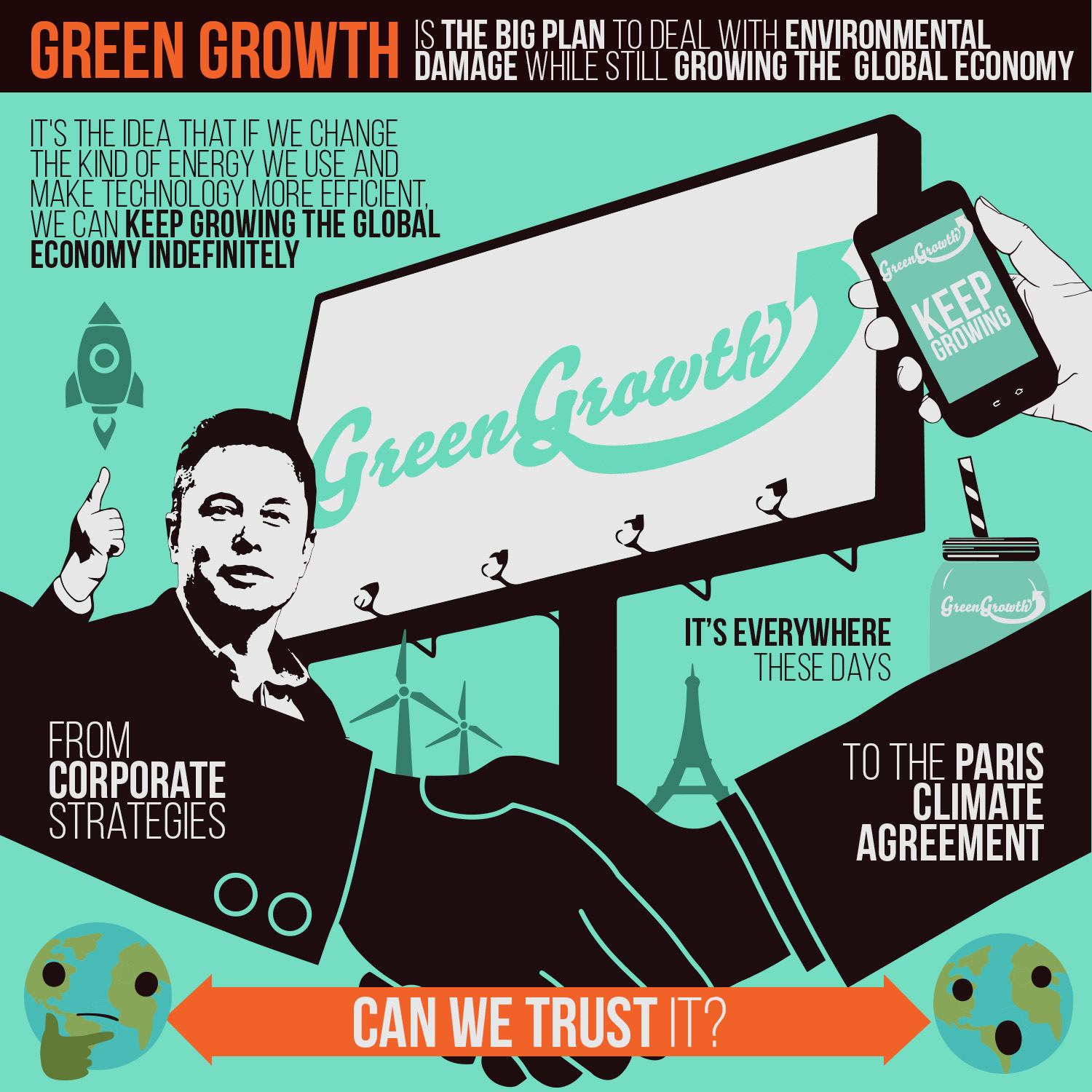 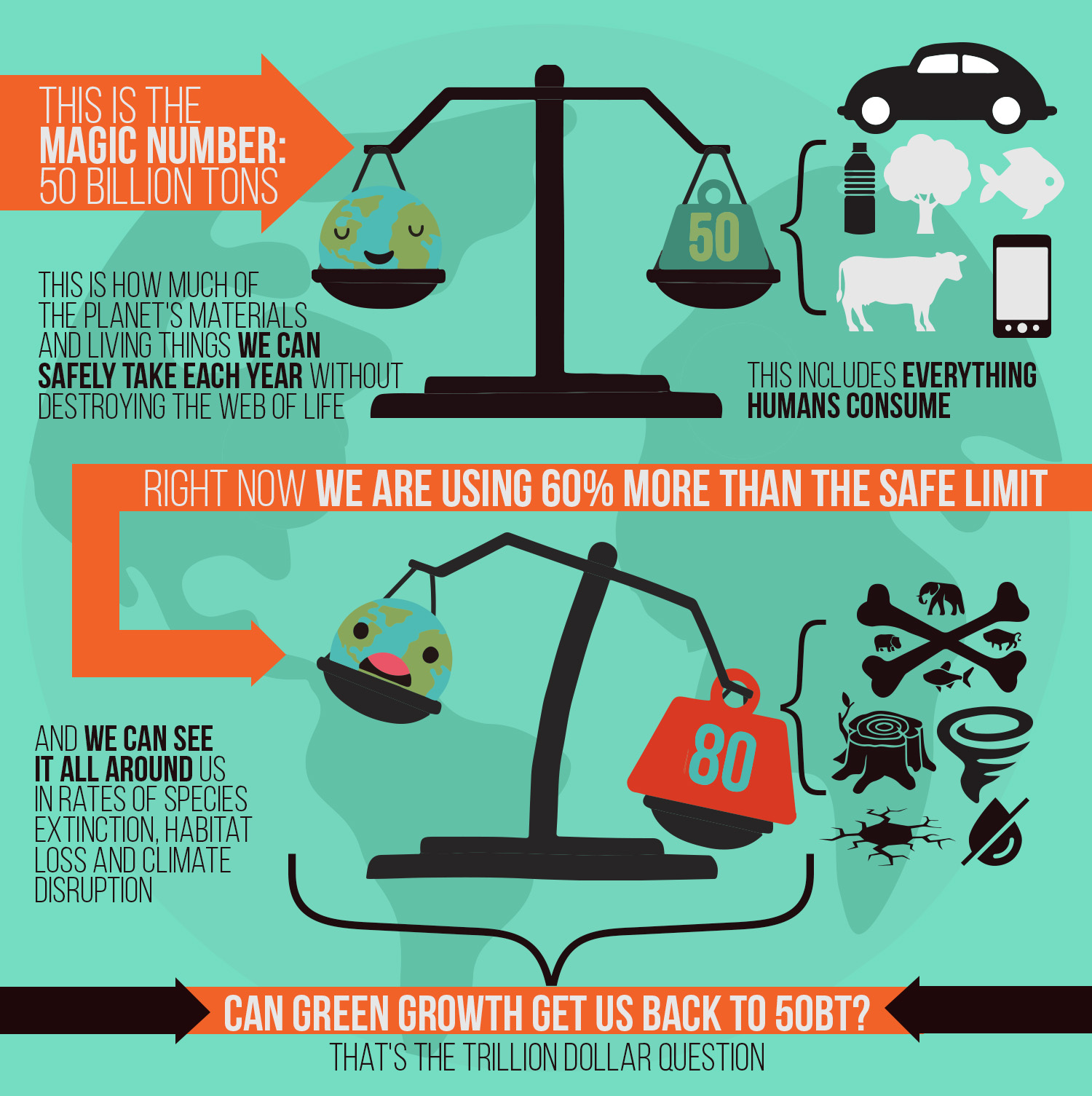 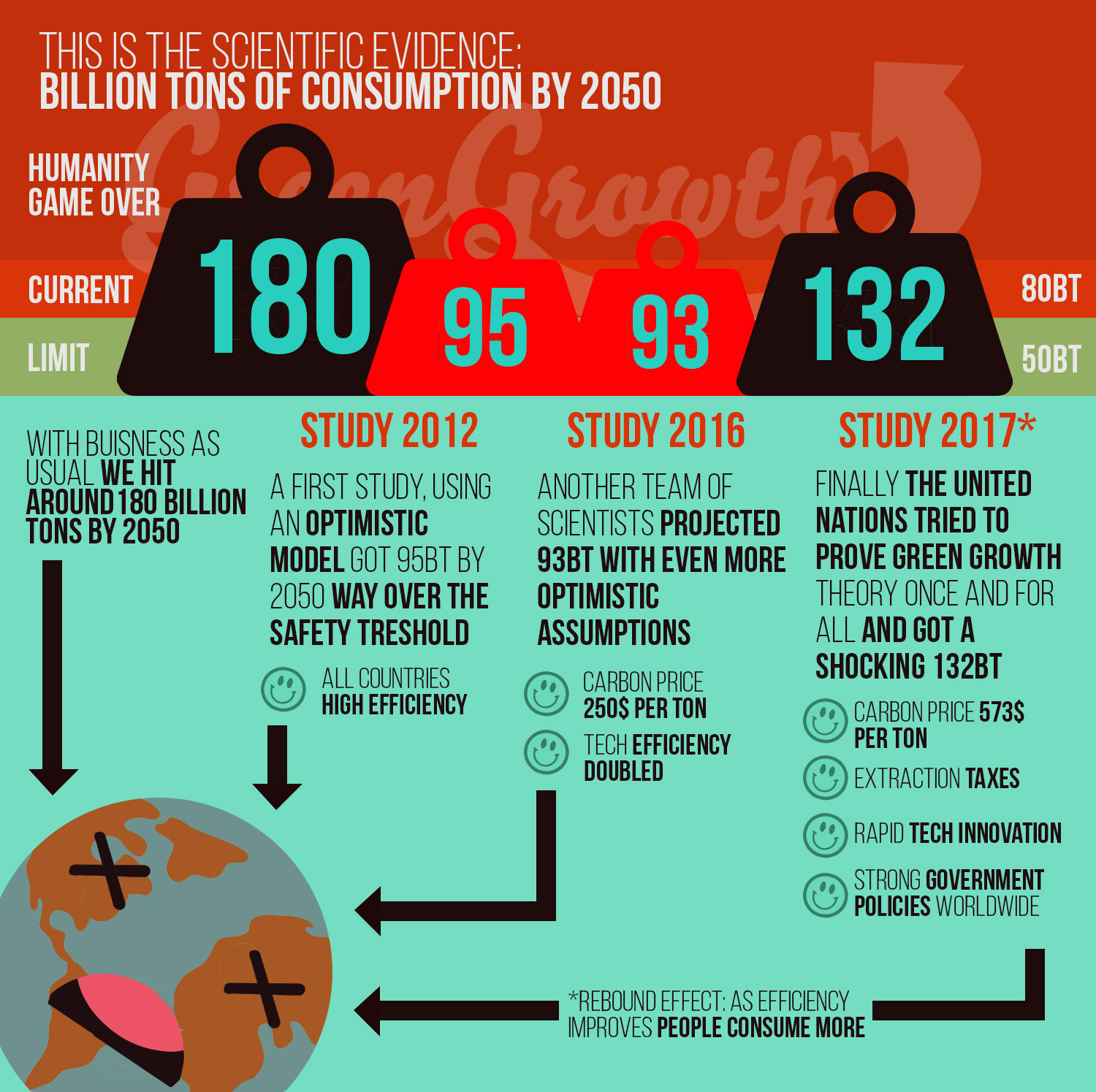 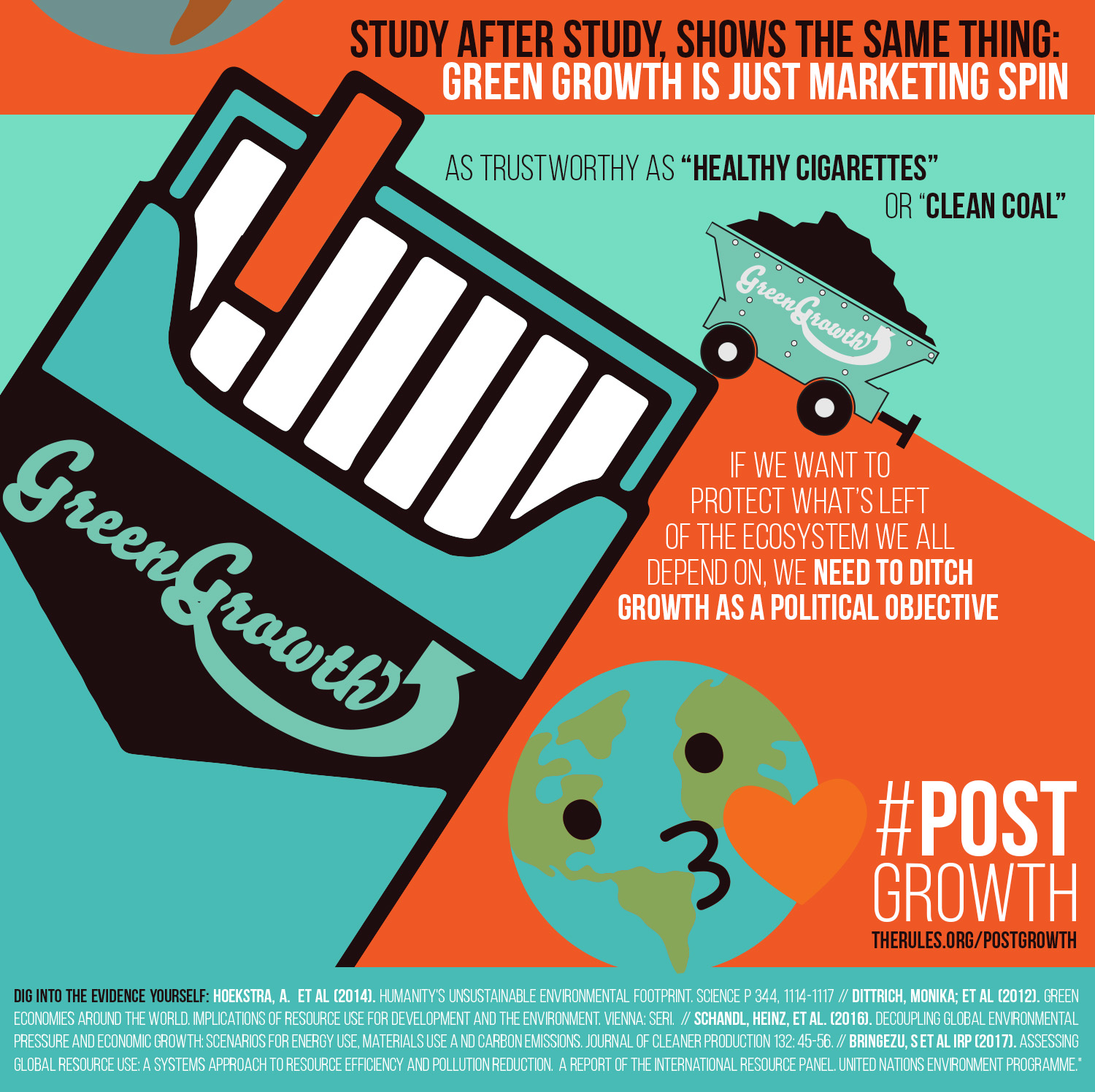 Are You Ready To Consider That Capitalism Is The Real Problem? By Martin Kirk and Jason Hickel

From “Green Growth” to Post Growth by Alnoor Ladha

Why Growth Can’t Be Green by Jason Hickel

A Greener New Deal is Needed by Jason Hickel

From “Green Growth” to Post Growth by Alnoor Ladha

Emergence as an onto-Epistemology by Bayo Akomolafe & Alnoor Ladha

How narratives shape the world with Alnoor Ladha

Since we were pre-empting the counter-argument of green-growth, we launched the meme campaign going after green-growth first. In hindsight, this was a mistake. Part of the reason we made this error is that we were too inside the discourse around de-growth and post-growth. The broader public audience didn’t come through a narrative arc that started with growth itself. As a result, the green growth articles, visual memes, and film were not widely shared at first. After the broader #GrowthOrLife campaign was launched, we did see an uptake in views, shares, etc. as allies were looking for ammunition, and as the green growth discussion took more precedence in popular culture. But we lost potential momentum.

The second major learning was that the application of #GrowthOrLife was most successful when applied with an on-the-ground community that could remix the ideas for their own context. Although it was not “our” work in a traditional sense, having a local community apply the thinking had more impact on popularizing the meme of #GrowthOrLife than any of our own efforts. Not coming from a place of ownership or attribute helped allow us to make an important decision to shift our resources to support the local community of Atenco which was leading the #YoPrefieroElLago campaign. 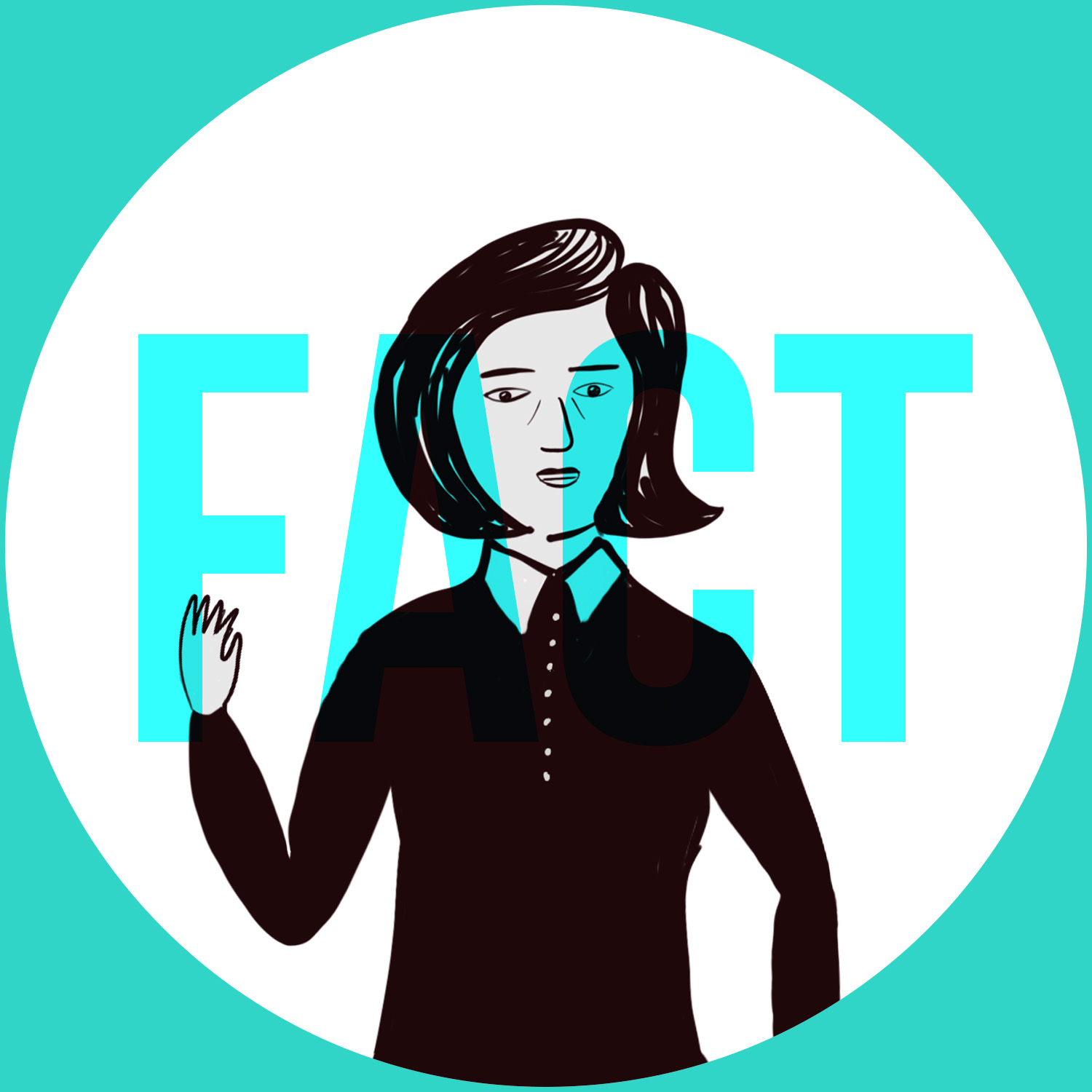