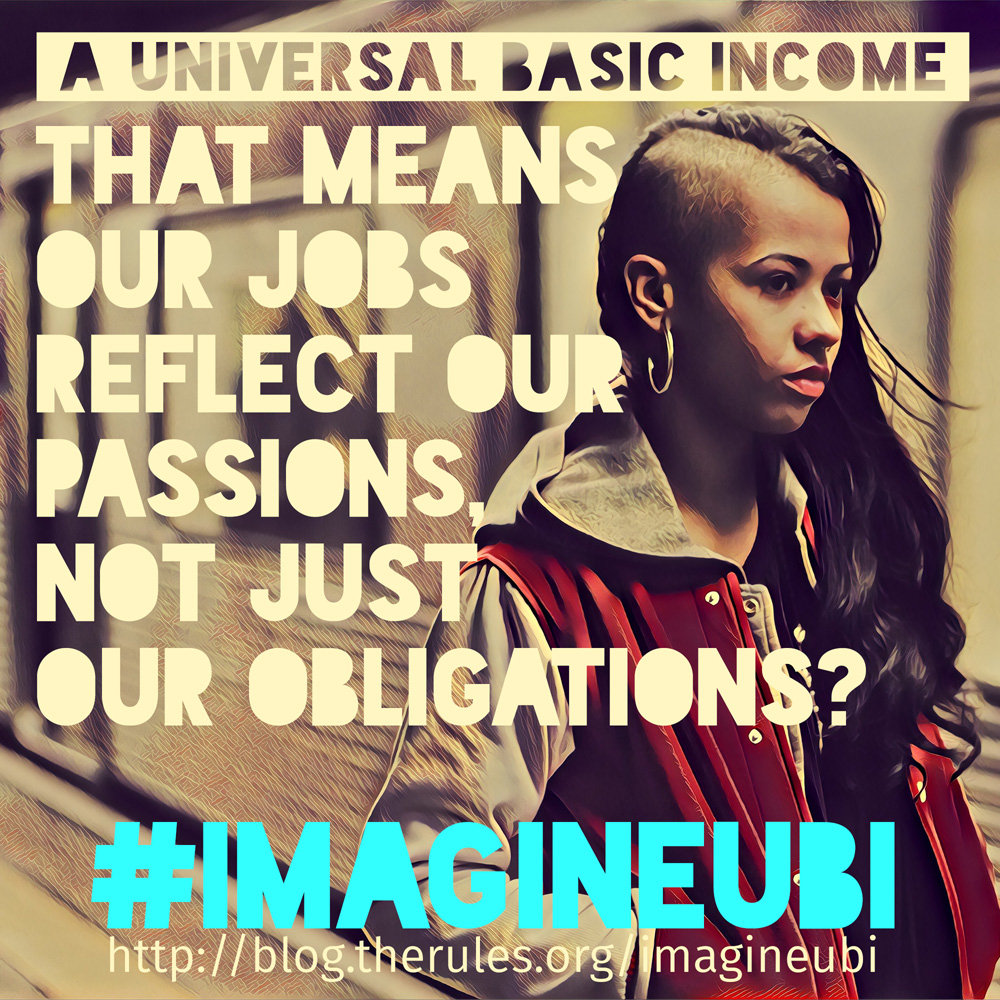 Few ideas have the potential of a Universal Basic Income (UBI) to address some deep systemic injustices. However, the way both the left and right frame the concept very often reduces it to an incremental tweak to welfare systems, which undermines its systemic potential right out of the gate. We intervened to try and popularize a more radical, systemic logic in the way UBI is understood and discussed.

Universal Basic Income is a powerful tool in the struggle to change the logic of money, income, and wealth. Although both the right and left have resonance with the idea, they disagree profoundly with what it is ultimately about, and how it could be executed.

Broadly speaking, the center-Left conceives of UBI as a form of welfare, and sees its implementation as a national-level social program. The Right wants to use UBI as the means to drastically reduce overall social spending. The result is an at times contradictory logic, which reduces the idea to its smallest conception, makes for confusing messaging, and increases the risk for both the potential of the idea and the uptake of it across the political spectrum.

Despite the confused narrative landscape, UBI is unmatched in its pure potential to revolutionize our relationship with money, labor, and the future in the face of climate change. This Culture Hack aimed to seed big ideas into receptive spaces to create action and transformation in world views.

We aimed to locate the cognitive and cultural resistance in the dominant narrative surrounding UBI – charting how it shows up in public space, who participates, and how it is framed. We used these insights to create a narrative campaign to help the launch of a community currency, and to infuse imagination and transformative power into the UBI conversation.

We applied the Culture Hacking method and tools to the narrative of Universal Basic Income to track the different conversations of UBI, understand their strengths and weaknesses, and to create a truly radical narrative of UBI.

This research and resulting prototypes aimed to expand existing UBI conversations, and frame it around UBI’s transformative potential – beyond the business-as-usual framing in policy circles.

We had three main narrative intentions for this campaign: 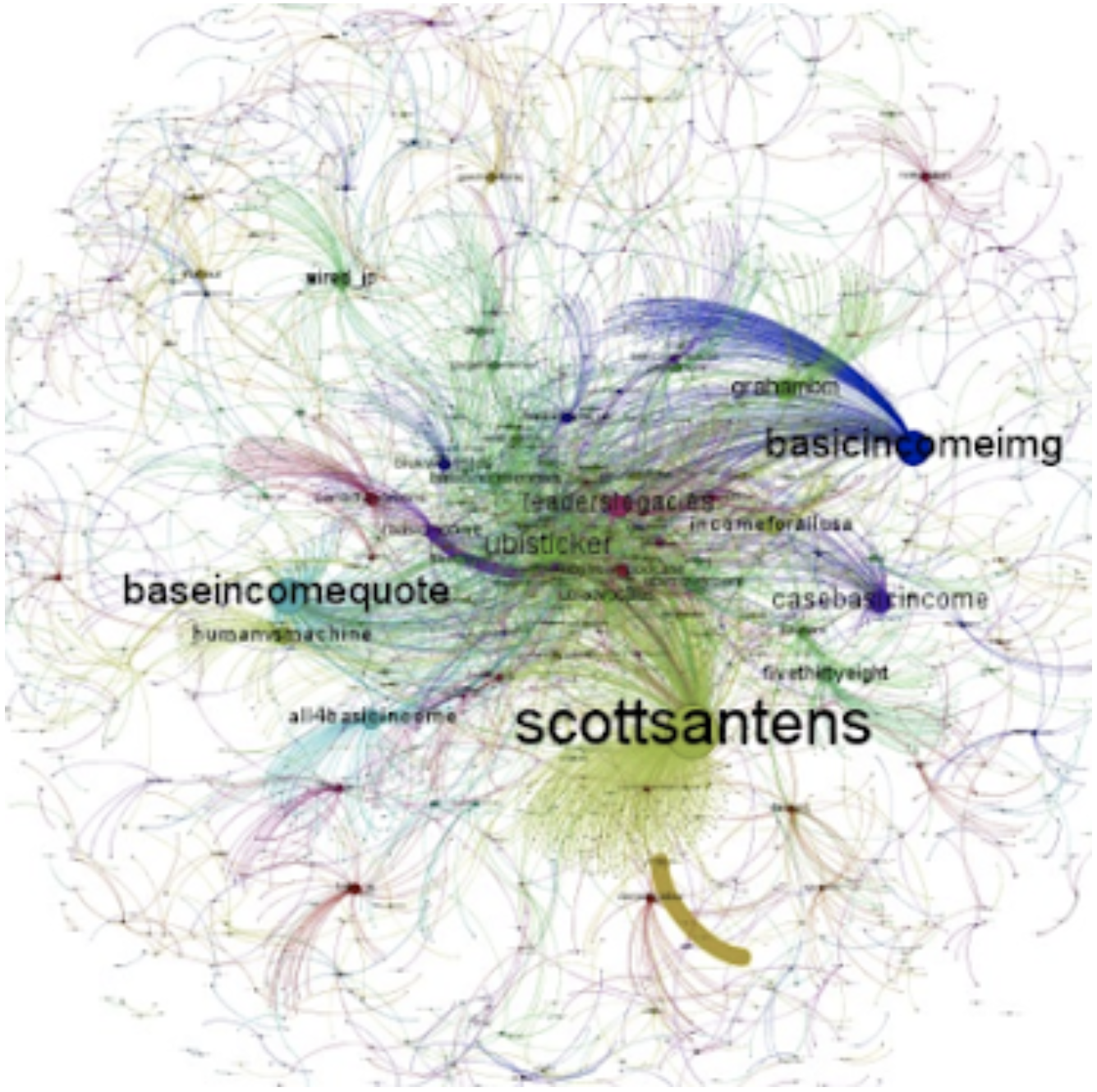 The UBI conversation was small and concentrated among activists, policy commentators, economists and already engaged influencers. The boundaries of the UBI narrative can be seen in this snapshot: It’s largely theoretical, elite, not realistic, and not part of everyday people’s lives. 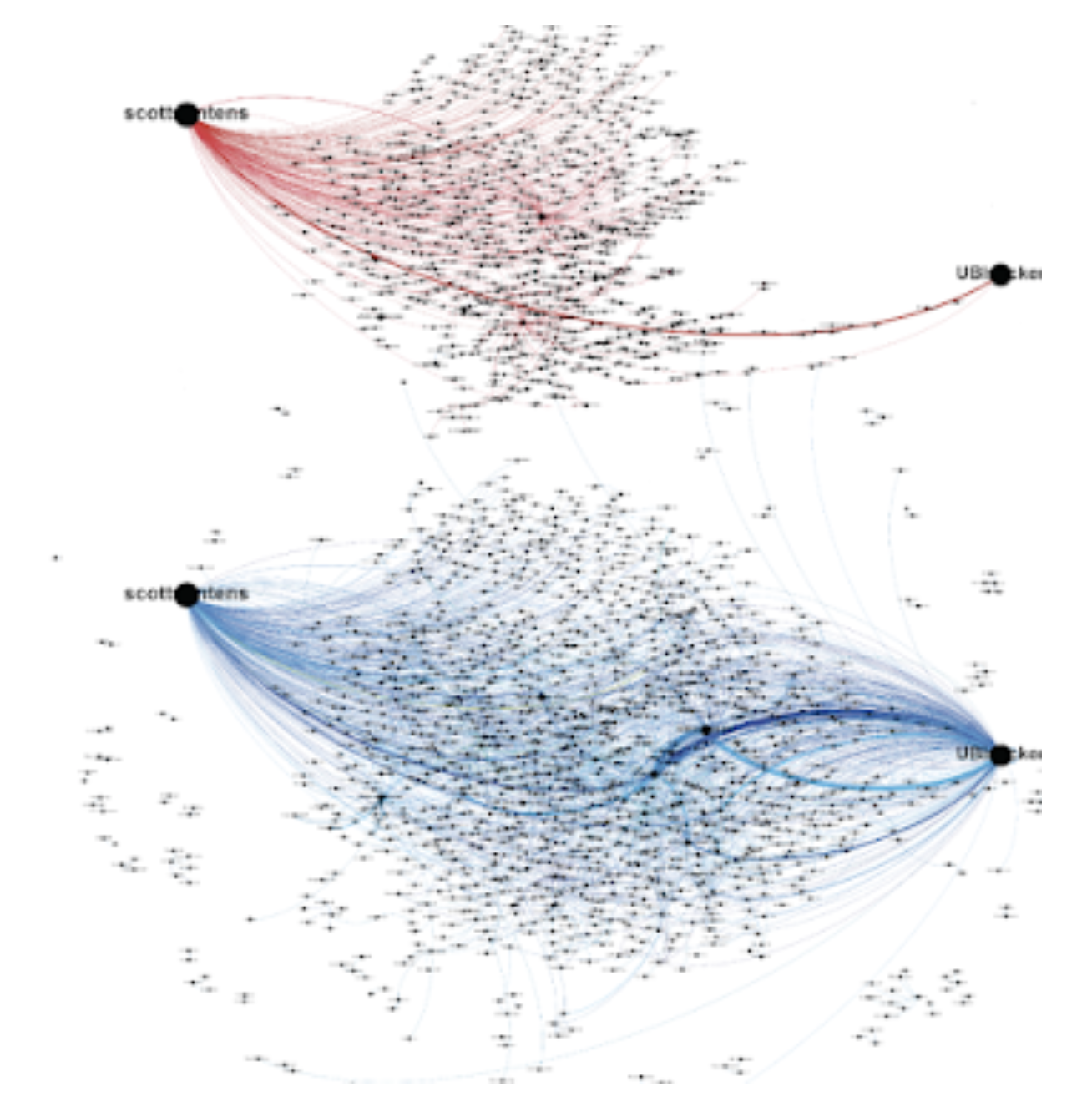 Messages in the active UBI conversation did not diffuse out into a broader audience base. An echo chamber effect kept the conversation from transcending its Northern, male, specialist domain. The ideas were flowing largely between a small, closed set of participants, already familiar with and influential in defining the conversation. 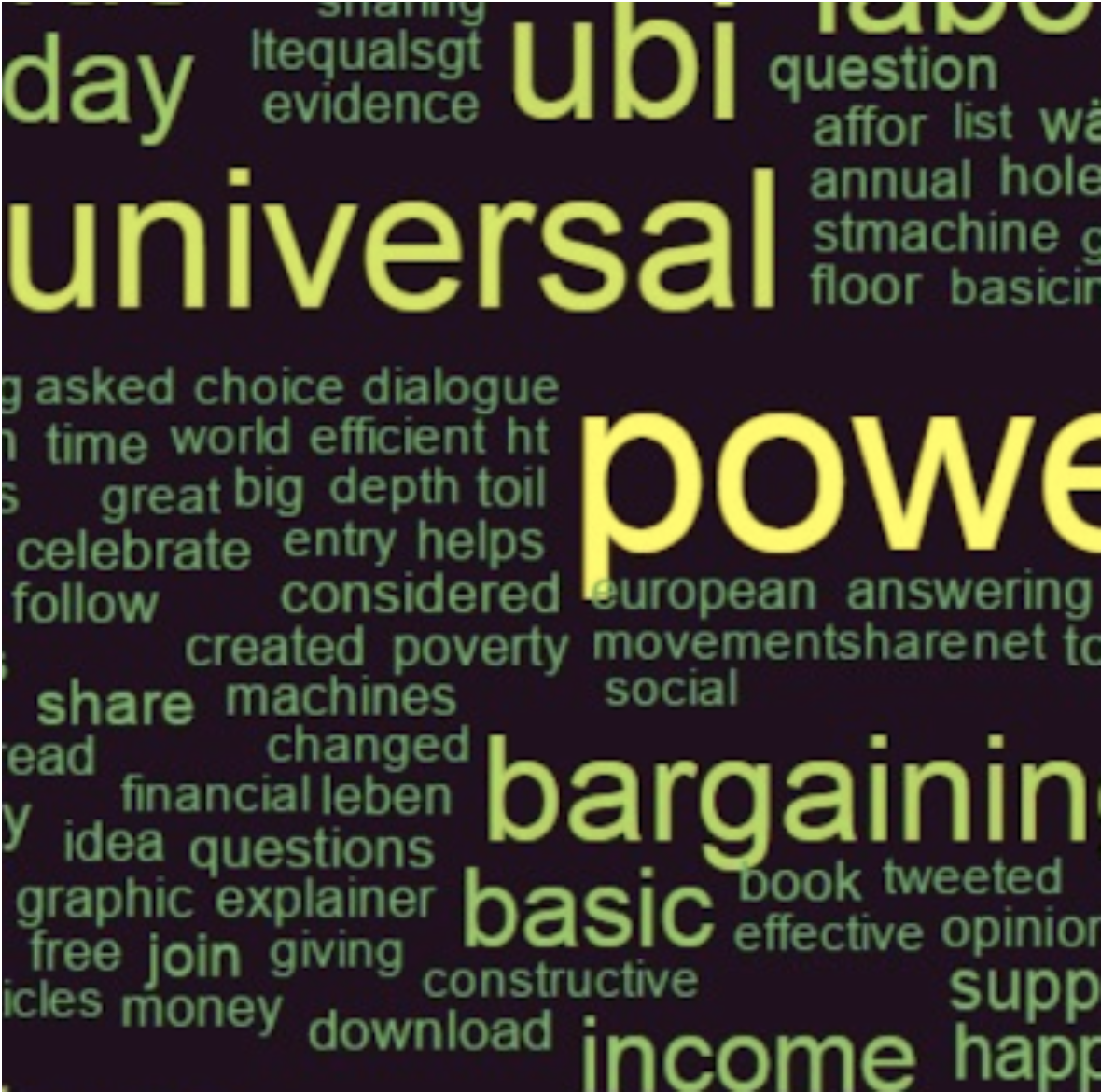 Policy, welfare, income only from labor — these frames pervade the conversation. They carry negative connotations of bureaucracy, unfairness and lack of ambition. UBI stays in the grip of an old and predictable narrative: the Western narrative of capitalism as the natural global economic system. How could it be, after all, that a liveable, dignified income is a birthright individuals have simply for existing?

The dominant narrative of UBI was stuck in a logic that is policy-centric and individualistic. The power of a dominant narrative is its ability to define the boundaries of what’s possible. So when we hear UBI, concepts of individual benefit, fairness and distribution minutiae are activated. The vision of UBI is one of a bureaucratic. convoluted, inadequate and non-transformative social welfare program.

We started to explore whether or not we could break open these cognitive traps and open up space for an engaging, imaginative logic of UBI. If the dominant narrative has an individualistic logic, we must create a community-centric vision. If the dominant narrative boxes UBI in at the policy level, we must infuse big questions about work, creativity and what’s possible in a world where our basic needs are met just because we are alive.

This led us to a meme campaign infused with new messages surrounding UBI – #ImagineUBI.  We crafted messages to amplify the transformative power of UBI as a cultural narrative of abundance. Framing UBI as part of a post-capitalist, progressive future encourages the audience to imagine that future for themselves. UBI becomes part of an inspirational story, rather than staying bound up in the current system.

The second phase of our strategy was to help promote a living alternative of UBI. After about six months of initial research, we decided to partner with Circles, a politically-aligned, radical blockchain-based UBI prototype, to create a narrative and visual identity, and to develop creative content supporting the transformative, truly community-driven economic engine.

Using the insights from the Culture Hacking work, we infused the new UBI core logics into the DNA of Circles, co-creating a platform that captures the imagination and serves UBI as part of a broader vision for a trust-based money system.

You can read more at: www.joincircles.net

The Guardian: Basic income isn’t just a nice idea. It's a birthright

Fastco: Can Basic Income Plus The Blockchain Build A New Economic System?

By Martin Kirk and Andy Milenius 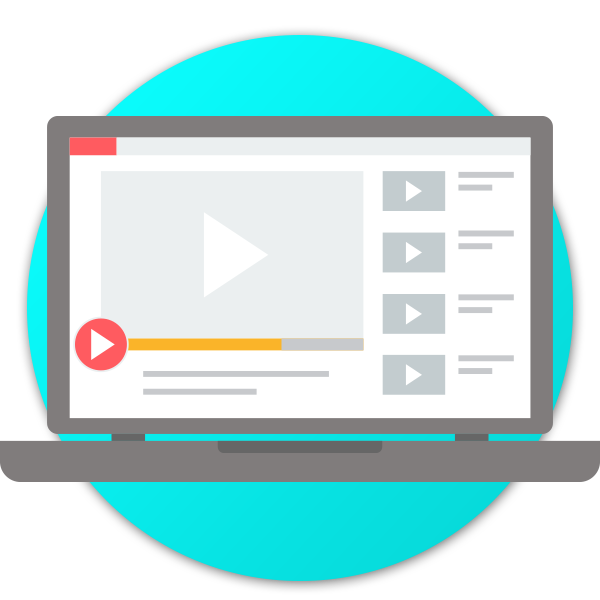 Our initial meme campaign of #ImagineUBI was seen by many influencers and we had on-going dialogues with key people in the sector. These informal briefings led to tangible shifts in the narrative from influencers, and arguably has been taken up by 2020 US presidential candidate Andrew Yang – his campaign’s framing of a “freedom dividend” marks a change from the welfare-centric, bureaucratic UBI framing previously used on the US national stage.

We do not take credit for this framing; rather, we point to the nonlinear nature of meme propagation. This was an ‘issue sector’ that had a lot of academic discourse but very little public-facing narrative work. When we experimented with communicating UBI to a broader public, it was embraced by the small group of people who spend their lives thinking about UBI. The impact of this cannot be measured.

Our decision to back a community currency prototype (i.e. Circles) in order for an exemplar to exist in the world was a premature decision. In hindsight, we should have continued our public facing meme work, and then backed a prototype as it was closer to rolling out. The public sphere still required priming around UBI. Given our limited resources as The Rules and our short time-span of existence, these issues were particular to our organizational context. For Culture Hackers in general, we stand by the idea of supporting a living example of an alternative to bring to life the narrative, but caution against putting too much weight on one particular prototype.

The UBI project highlights a key tenet of Culture Hacking work: Culture Hacking means both creating bold, impactful campaigns targeting specific strategic goals, and at the same time committing to the long-term, non-linear work of narrative change which, in time, leads to a whole new world of stories being made possible.