March 19, 2015by The RulesNo CommentsCommons, Do we Live on a One Party Planet?, It's The World Vs. The Bank, Money, Power, Secrets, Themes 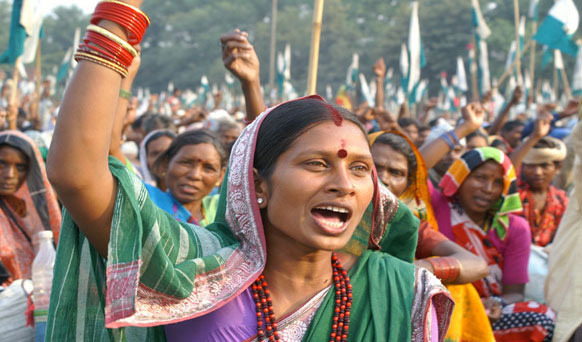 Rajagopal P.V., President and founder of Ekta Parishad talks about the growing protests against the new Land Acquisition Ordinance passed by the Indian government which tramples land rights of farmers in India.

The bill to make this ordinance into an act is facing stiff opposition in the Rajya Sabha, the Upper House of India’s Parliament. Civil society groups, farmer groups across India and political parties in the opposition are putting up a fight against this bill which in its current form violates land-rights of farmers and indegenous communities to push the corporate agenda.

In this interview, Rajagopal P.V. explains the need to protect farmers rights and the importance of doing the same non violently.

Q: Rajagopal P.V.,do you think you can convince the Indian government with the march from Palwal to Delhi?

There is a different culture of protest going on in the world: The culture of nonviolence. Most protests are ending with throwing stones and setting cars on fire. But more and more people understand that they should be patient and act nonviolently. With this kind of movement evolving, the government should also use a new form of dialogue. The media should follow this culture of protest and stop reporting violent actions otherwise it is an accomplice of violence.

Q: Nonviolence is not a USP in the media industry…

When violence is in the news, violent actions are inevitable. Newspapers and TV-channels are promoting the incentives to conduct wars and have guns. But journalists should rather become ambassadors of peace. Violence is seen as a bestseller. We have to find a space for nonviolent news reporting. How long will human beings continue to promulgate violence?

Q: Lets talk about the last days: What have you achieved through the march?

An expansion of our network happened. Many leaders became concerned about this issue; A lot of organizations came around the marchers to learn about their struggle, and many young people became volunteers. A dialogue and a first round of discussion started with the new government. In front of Parliament, in the well-known area of Jantar Mantar, a lot of leaders came together from different social organizations. An important message was palpable to onlookers: Nonviolence is possible!

Q: Why do we have to convince people of this?

People forget the idea of nonviolence very fast. We have to remind them all the time again and again. Nonviolence is a tool for the poor! Nonviolence can attract people. The arrival of Anna Hazare, a nonviolent leader, has given the land movement a new hype. We have been fighting for land rights for years and although Anna Hazare has been mainly known for his work on anti-corruption, he has now shifted to the defence of land rights. He has done this because of the government’s interest to appropriate land from small farmers. With his intervention we can now continue with dialogue with the government.

Q: What were the challenges on the march itself?

It was winter in the night: We had cold nights and not many blankets. Some people got colds. There were many difficulties but it was a short walk. Only 80 kilometers. This habit to walk, eat, sleep and pray together is important for our movement building. A man asked me: “Why you are sleeping on the road?” It is our commitment and we have to do it. This is a real act of solidarity.

Q: What are the demands to which the government agreed?

Home Minister Rajnath Singh has assured the leaders of Ekta Parishad that the government will support a law for right to homestead land. Nearly fifty million people are homeless in India. They do not have any land or house in the rural areas in which to live with dignity and the possibility of earning a livelihood. The government has agreed to reconstitute the National Land Reforms Council. But there is no guarantee they will scrap the Ordinance. Ekta Parishad is also asking for land to be redistributed in the country.

Q: All these organizations – including Anna Hazare – have diminished the presence of Ekta Parishad eventhough you did all the work. Is this not a disappointment for you?

For many it was a disappointment. But not for me. I am really happy. The person is not the issue. The issue is land. It does not matter who is the spokesperson. This is something that many social leaders ignore. It is not the question of a picture in the newspaper or just a speech on the stage. People get upset: “Raja Ji is not seen….” people rumored. “Anna Hazare played the front role.” So I had the time to act in the background and connect interests. We should change the idea of leadership in India. People should build alliances together – not for the leaders, just for the cause. I try to set an example. I would like to transform leadership. This is also a part of nonviolence, not to project someone. I have also tried to develop a new culture of leadership where I focus on the community and not the person. In fact I could establish Ekta Parishad because I never asked questions about people´s background in the beginning. I just accepted people for what they were and built the organization based on people’s initiative.

Q: But with all of the participating organizations… Did the interest of Ekta Parishad get compromised?

When I started with Ekta Parishad, no one was interested in the issue of land. India took care of water, environment, laborers and mining. Land rights were the issue of Ekta Parishad for the past 25 years. Land is basic, and water and forests are related to land. I am happy that land has become higher on the political agenda. Then there may be the political will to solve it. People want to protect the land of farmers. In addition Ekta Parishad wants a redistribution of the land to those people who do not have land. The land is important for farmers, but also for others. Anna Hazare will build a national committee. I will play a roll because I do not have any direct interest. I want to use any power for a positive use of helping to distribute land.

Q: We are afraid that the government just made promises and nothing will happen in the future…

Ekta Parishad has four main issues: Firstly, the government ought to withdraw the Ordinance, Secondly, homestead land should be distributed, thirdly, there should be implementation of Forest Rights Act, and finally the national land reform policy should be enacted and the national land council reconstituted. The last item is interesting for everyone. It is broadly looking at land distribution for all marginal groups. Poor people need to be concerned with other people’s land distribution, not just their own. .

Q: Why is the government pressing for an issue which goes against the interests of the electorate the voted it into power?

The government will loose the next election. They cannot get the backing of the farmers anymore because they lost it. The party came into power with a big popularity. In a democracy you have to live with the government and try to work with them. But our government falsely believes that industry will make our country prosperous. This theory was sold by industry to various governments for decades. On the other hand, they have said that agriculture would not create employment. But in fact in some western countries today, people have realized that this system is also not working and they are losing their jobs. This creates violence. Why should India imitate the west when it has other alternatives? At least agriculture has a future – least for the food.

Support this fight for land rights in India: http://bitly.com/1EFK5t3 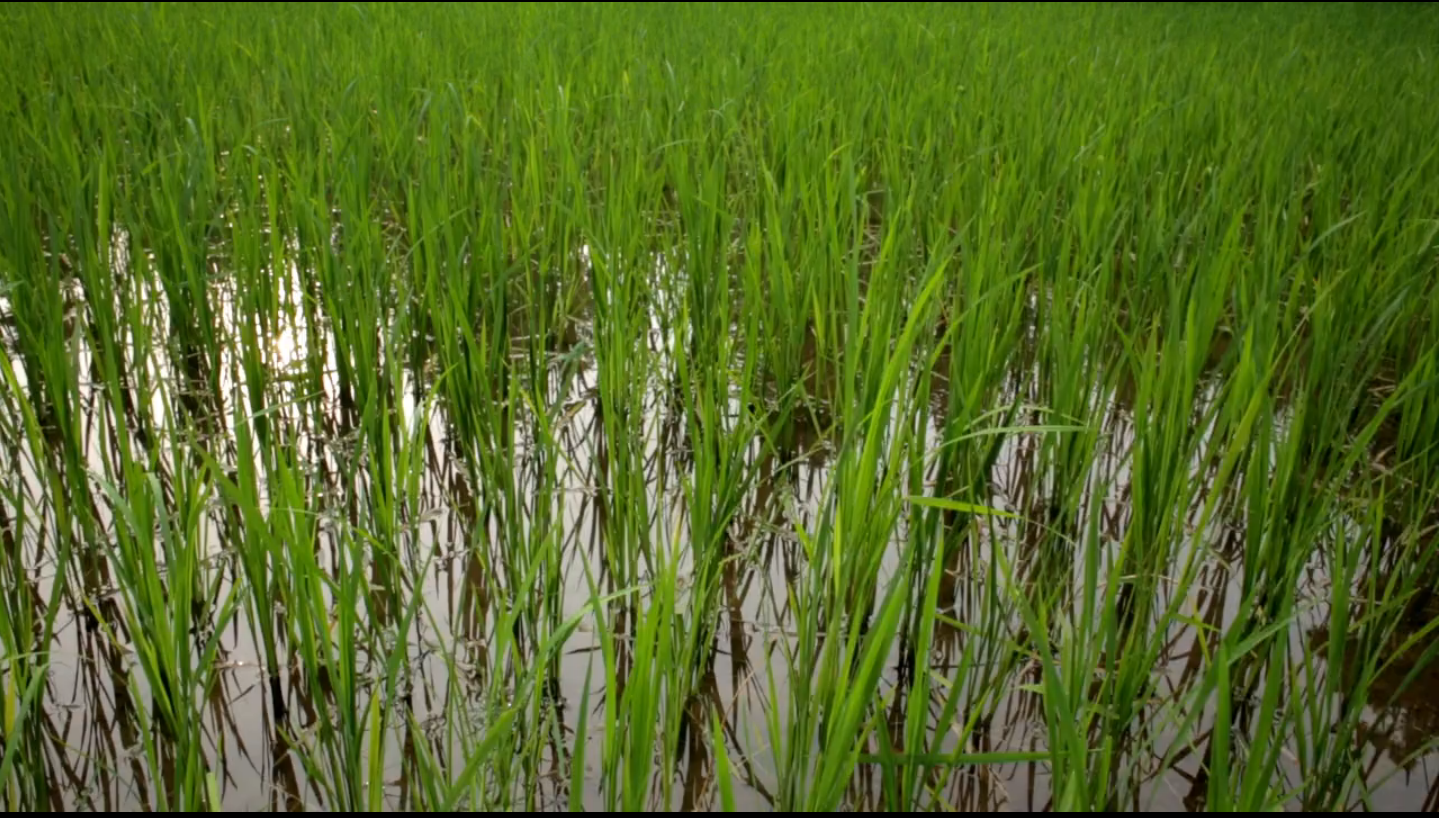 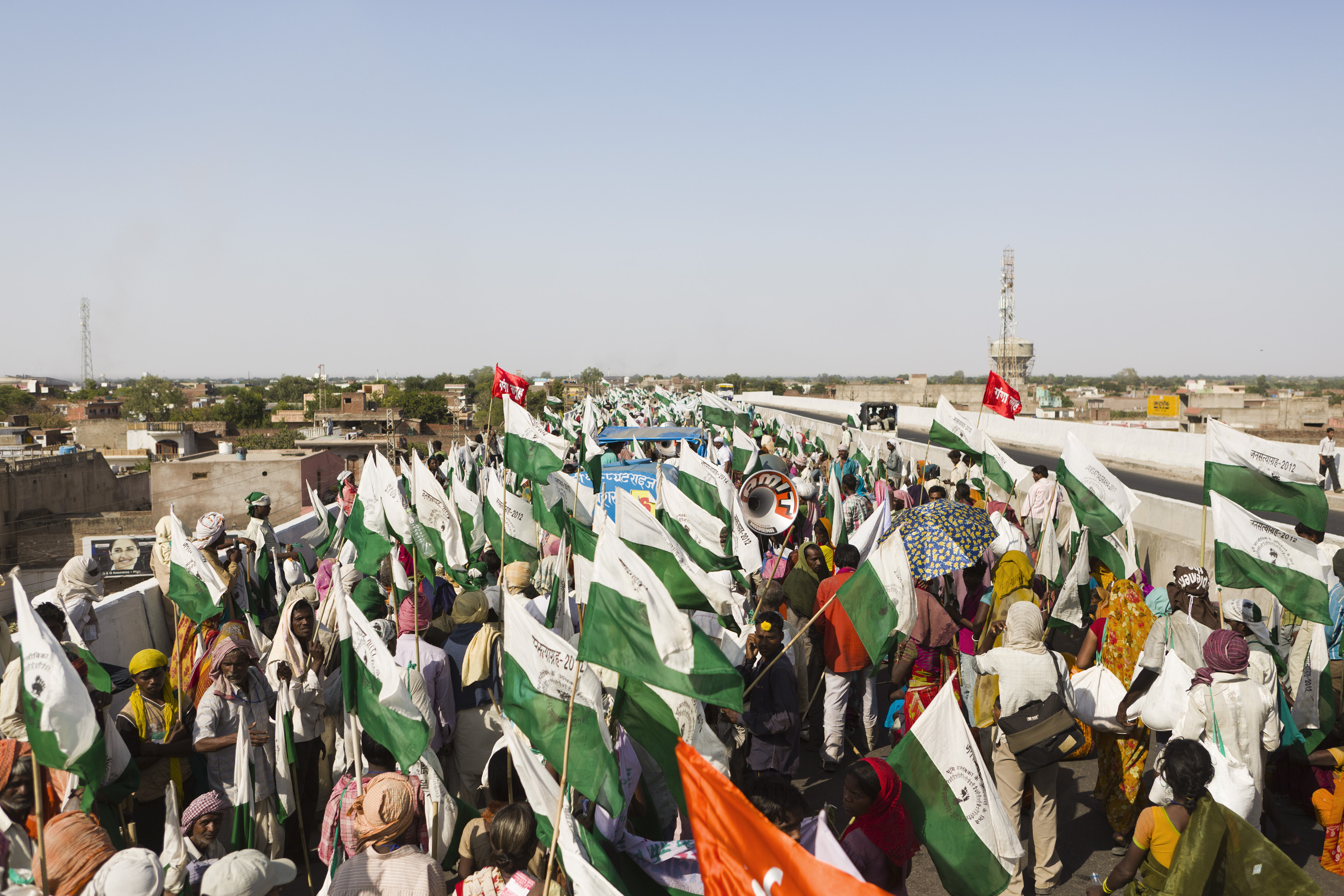 « Previous post
Capitalism is just a story, and other dangerous thoughts (PART 1)
Next post »
2 ways to understand climate denial in America