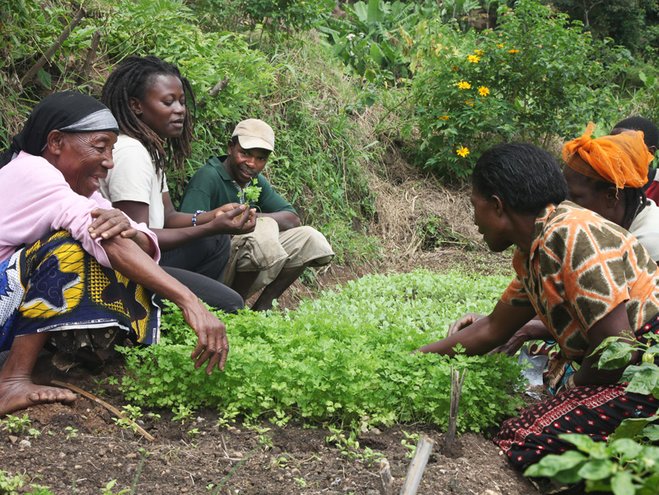 By Rachel Hamada on March 5, 2015 — A new report on agroecology details a holistic system of farming that allows power – and food – to stay in the hands of the many.

Janet Maro (2nd from left) agronomist and Sustainable Agriculture Tanzania project manager teaches her Bustani ya Tushikamane (Garden of Solidarity) group. In 2013 she trained some 2700 farmers, 46% of whom were women. Photo: Biovision

The news can be hard to face these days. And in the face of so much negativity, and even horror, from Boko Haram to ISIS via drone strikes, police racism and environmental catastrophe, sometimes it feels like all we have the energy to do is resist, and sometimes even that is soul sapping.

But there also come times when people propose new models of being and behaving that allow us to imagine that the world could be better. One such idea is that of agroecology, worldwide but especially in Africa. Here, the continent is currently in the midst of a rush for land that feels like the new Gold Rush – or indeed the new colonialism. The new gold might be rice for export or it might be crops for biofuel, but it’s generally not anything that will do Africa’s rural inhabitants any good…

Instead, a report just published by global justice campaigning organisation Global Justice Now, based in the UK, and informed by the likes of Tanzania sustainable agriculture champion Janet Maro, puts forward an ideology that leaves power very much in the hands of the small rural food producer, rather than in the hands of the multinational companies that are currently hooking into Africa’s vast tracts of fertile lands with the help of Western aid money and easily persuaded local politicians.

With apocalyptic views of the future of food on Earth abounding and an already disastrously skewed system that produces more than enough for all but still lets millions starve, the search for a solution is pressing. But at a time when corporate power is at its zenith across sectors, the struggle to put across an alternative vision is hard. The vision in this report is compelling – informed both by top academics and researchers in the field but also by bold visionaries at the grassroots level. Fundamentally, the idea is a small-scale producer-led system that ensures people have sovereignty over their food supply at a local level.

Research by the UN shows that switching to agroecological farming methods has increased yields across Africa by 116% and by 128% in East Africa compared to conventional farming. Using these methods is said to impact positively on gender equality, help create work, improve health, increase biodiversity, and improve the resilience of food systems in the face of unpredictable climate change.

As well-known agroecologist Professor Miguel Altieri puts it: “The issue seems to be political or ideological rather than evidence or science based. No matter what data is presented, governments and donors influenced by big interests marginalize agroecological approaches focusing on quick-fix, external input intensive ‘solutions’ and proprietary technologies such as transgenic crops and chemical fertilisers. It is time for the international community to recognize that there is no other more viable path to food production in the twenty-first century than agroecology.”

Helping agroecology to win in Africa is a challenge, not because it doesn’t work, but because of pre-existing obstacles put in place by the powerful. African nations are often forced into free trade arrangements that don’t suit their interests, and the regular inability thereafter to subsidise local farmers, impose quotas or tariffs or control prices means that farmers are vulnerable, especially when there is pressure to focus on food for export rather than consumption or local trade.

Farmers are vulnerable, especially when pressured to focus on food for export

Another issue is research and investment – most of this is done by or via big companies that prioritise high-technology but conventional farming, using expensive chemicals and fertilisers and proprietary seeds – so benefiting the likes of Yara and Monsanto (part of the controversial New Alliance agribusiness push), but offering little for individual small-scale farmers who become locked into pricy products that they never really needed in the first place.

Lastly, land ownership is a major issue – many small-scale producers in rural Africa tend land that has been passed down through generations of their family but has never been officially documented. In fact some 90% of land in rural Africa is unregistered. For generations this hasn’t been a problem, but the treasure that is Africa’s often fertile soil has been realised by parasitical multinationals who are now flocking to buy up land cheaply from local governments. Sadly officials often deem land to be for sale despite knowing the de facto way in which land is used, and being aware of the implications of small farmers who know no other vocation being displaced. Sadly lucrative land grabs are all too common now, such as the recent one we reported in Nigeria, where small-scale local food growers were thrown off their ancestral land to make way for an American prisons tycoon planning to grow rice for export and with an already questionable record in Kenya.

But the ideas in this report lead somewhere much happier. It includes policy proposals for Western governments who currently often weigh the scales towards ‘food security’ and dependency rather than toward food sovereignty, localisation, independence and resilience. It also offers vivid illustrations of how holistic this kind of agriculture is – giving practising communities power over their own health and welfare.

As Janet Maro herself says: “Agroecology encourages a holistic approach and the integration of humans, plants, animals and the environment, into a system where all involved help each other and create important relationships which result in healthy people, healthy plants, healthy animals and a healthy environment.” In other words, good news.

Global Justice Now’s agroecology report From The Roots Up is full of further information, including specifics of many old and new methods of cultivation and seed storage practised in different parts of Africa 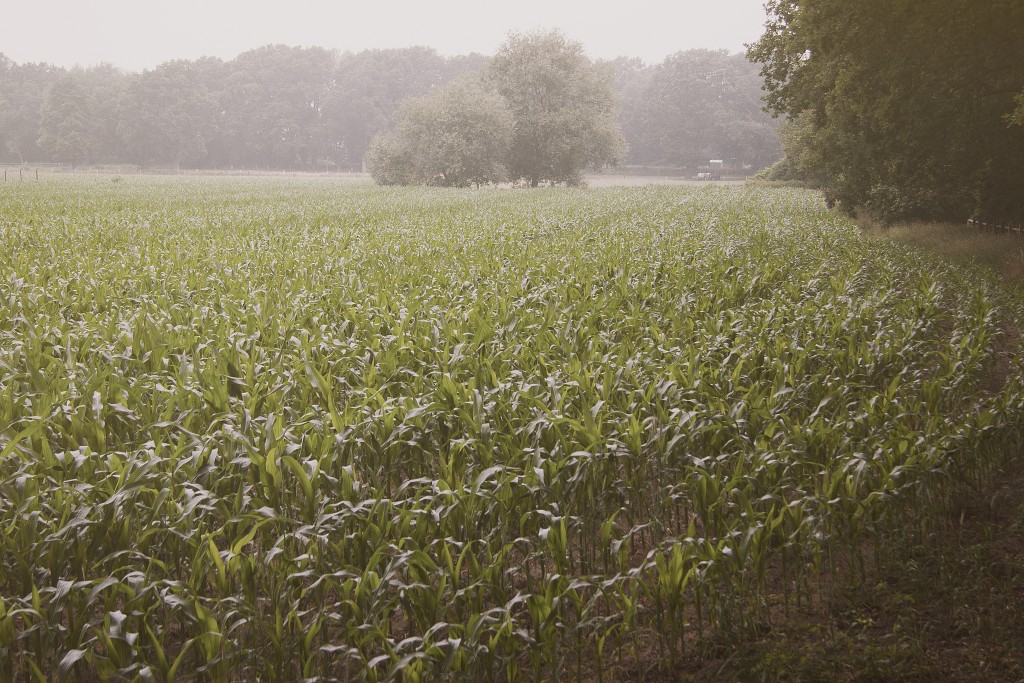